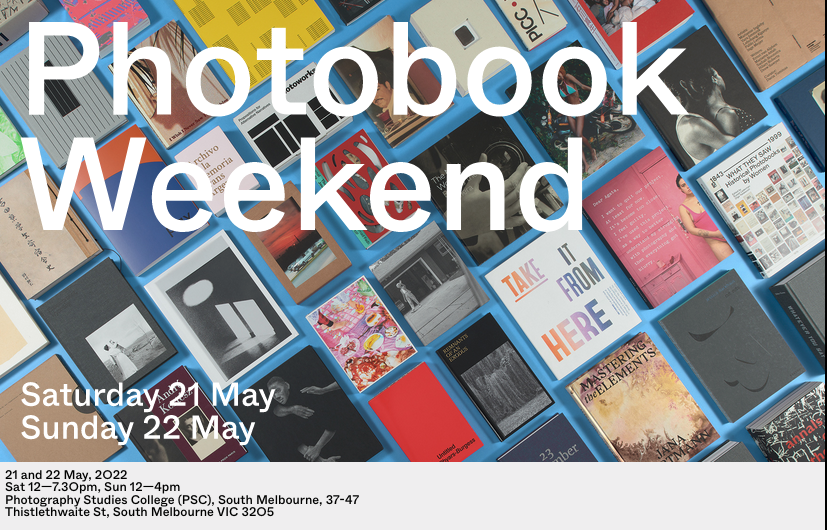 Presenting some of the best new Photobooks, as well as many opportunities to learn and network, the Photobook Weekend will include casual talks and panel discussions, the Photobook Market, Portfolio reviews, social book launches, book signings and more. For fans and makers of photobooks, this event is not to be missed.

We canvassed photobook friends and acquaintances for images and words about their experiences of the PHOTOBOOK WEEKEND Event and have published them here in this post.

The presentation of post is in the form of a ‘Stream of Consciousness‘ feed.  All contributors are credited with their name in the photograph’s caption and contact information for them is included at the end of the post. Also included is a screeenshot of the complete program

In viewing this post those who attended will have memories refreshed, and those who were unable to attend will get a sense of the event.

Thank you to PHOTO 2022 FESTIVAL and event producer LINSEY GOSPER for including this special photobook EVENT IN THE program, the team at PHOTOGRAPHY STUDIES COLLEGE – the venue for the event, The KASELL DUMMY AWARDS, the PARIS PHOTO-APERTURE AWARDS and the ASIA-PACIFIC PHOTOBOOK ARCHIVE for Making avAilable books from their collections. 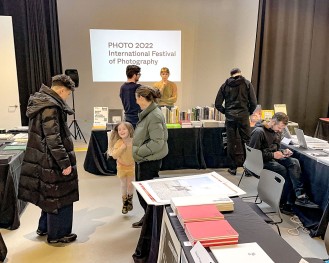 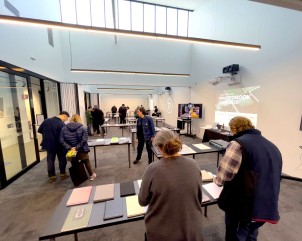 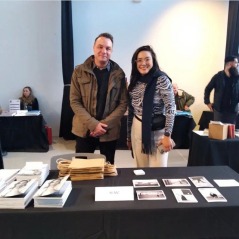 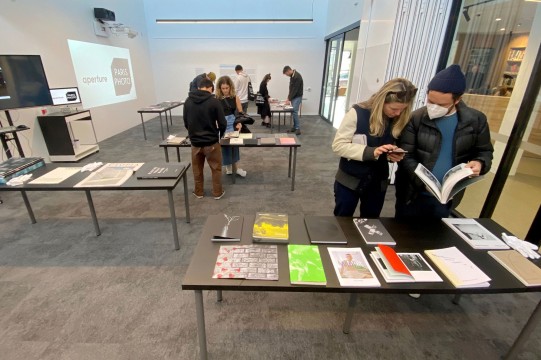 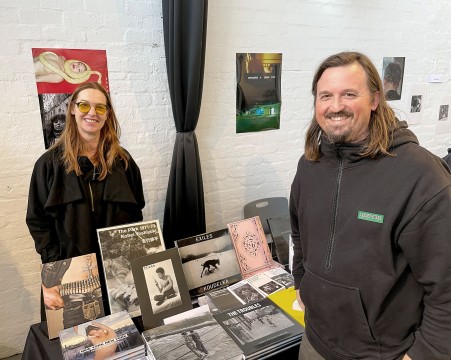 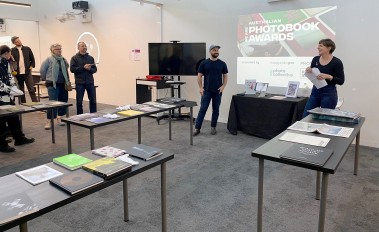 Announcing the Aust Photobook of the Year PHOTO: Libby JEFFERY 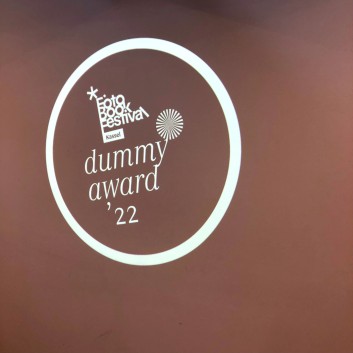 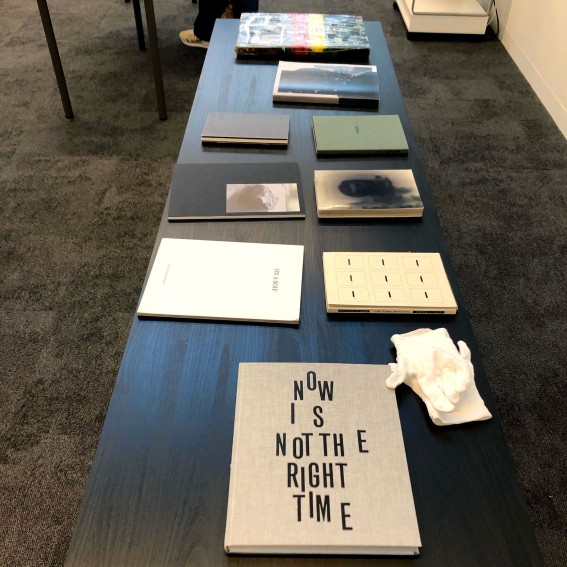 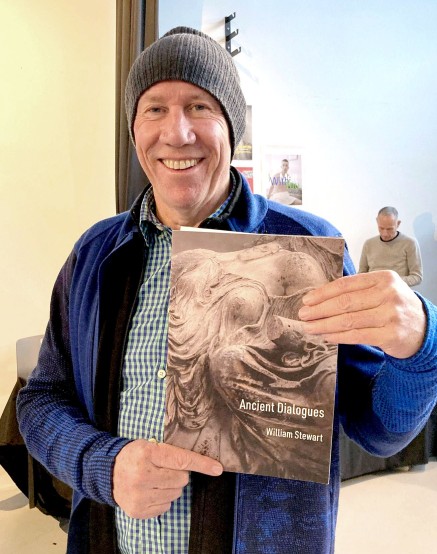 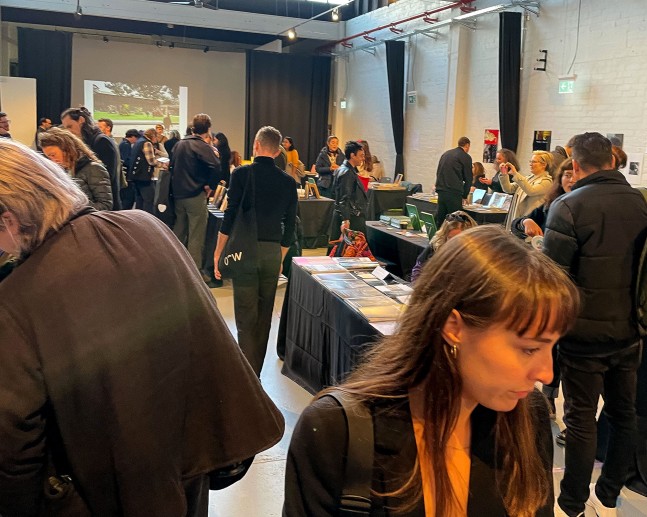 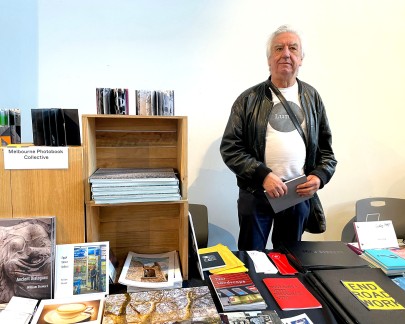 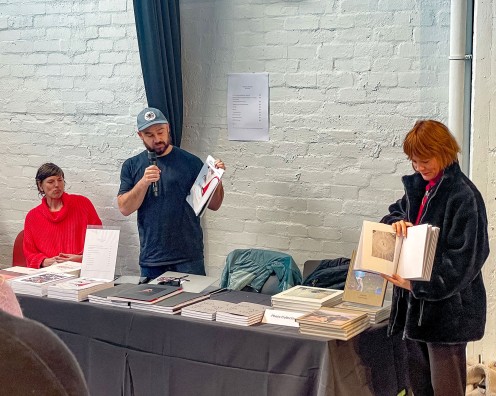 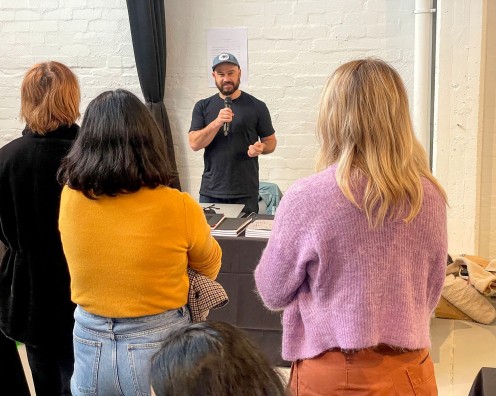 Talking about books at the Market PHOTO: Mike Reed

Really great event and set up and mix of stallholders. I liked the format of talks at the stalls every 30-60 minutes. Great weekend too for our current exhibitors in our Photo 2022 shows at the Benalla Art Gallery; Atong Atem launched a book and the OCULI show members – Alana Holmberg won the Australian Photobook Award and Sean Davey also launched a photobook. 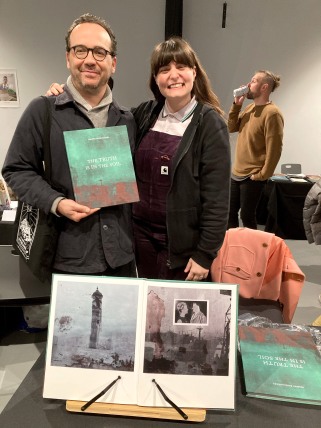 Just recovering from a great weekend at PHOTO 2022. I think the Photobook Weekend, hosted by the Photography Studies College was a huge success. The Photobook Market was buzzing and the workshops were thought-provoking. At the Melbourne Photobook Collective stall Mike Reed, Anne Davies. Stu Murdoch and Bill Stewart were very happy selling their books and chatting with those who were interested in the latest works. And we had a fun time discussing our favourite books in our Reading Photobooks workshop. All very stimulating!

The Photobook Market was buzzing and the workshops were thought-provoking. At the Melbourne Photobook Collective stall we were very happy selling our books and chatting with those who were interested in our latest work. And we had a fun time discussing our favourite books in our Reading Photobooks workshop. All very stimulating!

Informal book launches worked really well, people could stick around or keep wandering and look at other books while they were on.

.For me there were lots of wonderful chats with people, made new friends and networking was optimum conditions!

.I reconnected with photographers who I did a CCP masterclass presented by Stephen Dupont and Marshall Webber of Booklyn back in 2015 – including Ana Paula Estrada. Her 2 large newspaper style books, from time spent with older people in their homes/residential care during COVID. Over 50 hours of recorded interviews is distilled down to just a handful of images along with text. She said her work is all about ‘reduction’

Ali MC’s book of photographs in Iran. Sitting at tables next to people you can get to learn a lot about them and their work. Love the suggestion of a book swap too.

.This book was gifted to me also, I met the guy and he said it was for sale on the metropolis table – I really dig it…!

To celebrate and advance the role of the photobook, PHOTO 2022 hosted a Photobook Market at Photography Studies College. City-wide audiences had an opportunity to browse some of the newest and most respected names in contemporary photobook publishing.

With over 20 stalls of Australian and International artists, publishers, designers and photobook advocates attendees had an opportunity to see, handle and purchase books by local and international photographers, publishers and bookstores.

Great conversations about photobooks also took place as well as networking opportunities and meetings with friends.

THE WINNERS OF THE AUSTRALIAN PHOTOBOOKS OF THE YEAR

WINNER: Arrayah Loynd for Come And Find Me

HIGHLY COMMENDED: Gloria Salgado Gispert for In The Land of No Worries

FOR A COMPREHENSIVE REPORT including  the Finalists, the Books and Spreads as well as BIOs on the Judges and the Awards Committeeon the Australian Photoook Award visit THE PHOTO COLLECTIVE’s SITE: HERE

MIKE REED SUMMED UP THE PHOTOBOOK WEEKEND IN THESE WORDS:

The post has been prepared by Doug Spowart with the support of contributing photographers – They retain All copyrights in their images.

They can be contacted via theIR associateD Email addresses.

Regional Artists from the Antipodean Photobook, the Centre for Regional Arts Practice and the Cyanotype In Australia. We live and work on the unceded land of the Bpangerang people. Always was always will be Aboriginal land. View all posts by Cooper+Spowart